“I am really satisfied with NetCrunch; it is actually a real 'colleague'. I can count on it because it helps me every day. Without it, it would be impossible for me to monitor all the necessary services.” 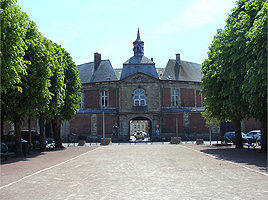 “I spent a lot of time looking for a monitoring solution, and finally I have selected NetCrunch", explains Mr. Masquelier.  Network monitoring software tends to look similar and often requires some programming or scripting - making the implementation quite complex and time consuming. " That's why NetCrunch was the best choice for me - it can perform smart network discovery and fast setup,  thus allowing me to use it as a single solution to manage several IT environments. Soon it was a real pleasure to work with this software, especially with its user-friendly and useful GUI”.

“Since the moment we got NetCrunch in our infrastructure, I have fell practically stress free because I know the status of all our equipment and fiber optic links between the buildings in a real-time. The most impressive fact is that NetCrunch detects failures before the users call my IT department”. NetCrunch’s notification options are versatile, including both the simple on-screen warning as well as the email automatically sent to one’s smartphone, allowing for fast reaction.

Benoît Masquelier tells a story about how NetCrunch has proved to be beneficial recently. An employee of the city hall was in a building that was inadvertently locked up while she was still inside. Shortly after, a power outage occurred in the building. She did not have her cell phone with her at the time and the IP phones were down. She feared having to spend all night at the office, without electricity or contact with the outside world. NetCrunch detected the loss of IP phones’ connections and immediately notified the network administrator who was able to restore the power, thus allowing the trapped employee to call someone and leave the building.

“I am really satisfied with NetCrunch, which is actually a real colleague. I can count on it because it helps me every day. Without it, it would be impossible for me to monitor all the necessary services” - adds Mr. Masquelier.

Marchiennes is a town in the picturesque region of the north France. The infrastructure of the town hall of Marchiennes is a complex one, with a Cisco 3700 series network, various VLANs, Wi-Fi points, two remote sites and mobile users in VPN, at least 8 virtual servers hosted on two ESX servers and a dedicated external server.

The town hall is also equipped with a Cisco IP telephony, with connections to the BlackBerry messaging, security based on the ASA Cisco, SNMP- enabled UPS and about a dozen of SNMP copiers/faxes.